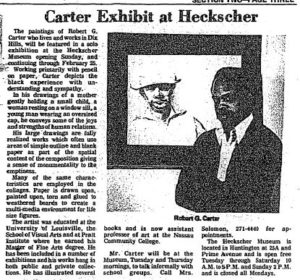 In 1973, Robert Carter became the first African American artist to present a solo show at The Heckscher Museum of Art, exhibiting pencil drawings and collages that depicted the Black experience. This year, the Museum purchased a signature example of his work for the collection. The acquisition is especially meaningful as it coincides with the institution’s 100th anniversary, a time for reflecting on the past and looking toward the future. 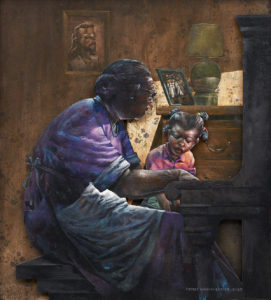 Mama Taught Me Piano and Much More (2007) depicts a quiet scene between a maternal figure, likely a grandmother, and a child seated at a piano. Capturing the interaction between the patient grandmother and her attentive pupil, the work speaks to the role of older generations in passing down knowledge. Carter’s representations of Black figures connect to universal themes, including childhood, music, and family.  He “employes Black images as vehicles, the real theme…is the bridging of a generation gap, the grandfather passing on something to the grandson. And for me, you know, that connection could have been made with any ethnic group.”¹ 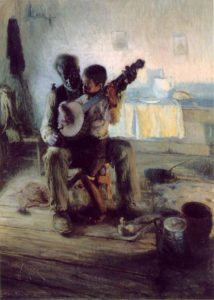 His work also resonates within the history of American art. Mama Taught Me Piano and Much More recalls Henry Ossawa Tanner’s 1893 oil painting The Banjo Lesson. Tanner (1859–1937) was an African American artist known for painting biblical scenes. The Banjo Lesson showcases the bond between a grandfather and a grandchild. Although Carter’s and Tanner’s works were created over 100 years apart, they both convey the tenderness of older generations teaching younger generations.

Carter’s background as a set designer informed the unique construction of this three-dimensional work, which incorporates wood, wallpaper, and paint. In the background of the work is a painting of Jesus, Head of Christ. This 1940 portrait of Jesus by artist Warner Sallman has been circulated over 500 million times, becoming one of the most widely dispersed prints of all time and shaping the image of Jesus for millions of people.

His skillful rendering of the figures also relates to his work as an illustrator, and the theme of learning connects with his own long career as an educator. Carter created illustrations for many publishing companies, including McGraw Hill and Simon and Schuster, and he was an art professor at Nassau Community College for over 40 years.