COLLECTION ON THE ROAD: Three Paintings in the Hall of New York at the State Capitol Building

Experts regard the Empire State Plaza Art Collection as “one of the greatest public collections of modern American art outside of a museum.” The Heckscher Museum is pleased to have loaned three artworks for display alongside this prestigious collection in the Hall of New York. 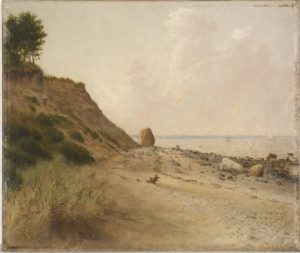 In Afternoon at Rocky Point (Target Rock) (1875), James Long Scudder (1836-1881) depicted the site of a lookout fort on Long Island used by the British during the Revolutionary War and the War of 1812. The son of a sea captain, Scudder spent his entire life in Huntington, first earning a living as a house and sign painter. He is one of Long Island’s earliest and most prolific genre and landscape painters.

The careful and clear detail Scudder gave to his subject in Afternoon at Rocky Point (Target Rock) reflects his long and intimate relationship with this part of Long Island. The artist divided the composition on a diagonal, from the upper left to the lower right, an approach typical of the Hudson River School painters, whose landscapes Scudder would have undoubtedly seen. Our eyes are drawn to the large boulder at the center, then move up the bluff, and down to the land below, with its rough patches of earth and wild grasses. To the right, the clouds and the sea meet the rocky shore. The sea and sky are luminous with reflections of yellow and pink sunlight, while the rising iridescent clouds visually balance the height of the land.

According to legend, the large boulder in the painting was used for target practice, giving the rock its name. At one time, the boulder was located on the bluff, but erosion has since changed the coastline. Located on Target Rock Road in Lloyd Neck, the site is now a National Wildlife Refuge. Other artists from the region have painted Target Rock, notably Arthur Dove (1880-1946).

We are proud that Afternoon at Rocky Point (Target Rock) is in the Hall of New York, since no collection or exhibit of art related to New York would be complete without this type of classic 19th-century depiction of Long Island’s land, water, and sky.

Oyster Bay (Cooper’s Bluff) (1933), by William Langson Lathrop (1859-1938), depicts the area off the northern coast of Nassau County that is named for the plentiful oysters found in the region. Lathrop was an American Impressionist landscape painter who grew up on his family’s Ohio farm, on the shores of Lake Erie. He later founded the artist colony at New Hope, Pennsylvania, where he lived for over thirty years and was a devoted teacher and mentor of young artists. 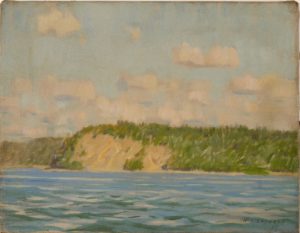 Lathrop’s work often features simplified compositions—usually little more than earth, some greenery, sky, and the sea. Although primarily a tonalist who painted rustic landscapes in darker, muted shades of earthy browns and blue-grays, he later developed a more impressionistic style, expanding the colors in his palette.

Oyster Bay (Cooper’s Bluff) is exemplary of Lathrop’s later work and also shows his fascination with the ocean. We can feel the movement of the water, the breeze blowing gently through the grassy knoll, and the full clouds floating in the warm air. The gentle downward diagonal of the shoreline adds to the simple expressiveness of the painting, so filled with Lathrop’s inner feeling on the bay.

For the last eight summers of his life, Lathrop lived on the Widge, a sloop he had built. Sadly, Lathrop lost his life while caught in a hurricane off the coast of Montauk. Yet his love for the ocean is immortalized in this painting. Visit this link to see a video of Lathrop and his boat from 1930. 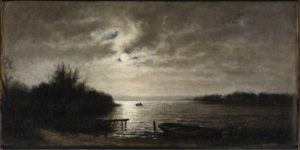 Charles Henry Miller’s (1842-1922) The Rising Moon (c. 1880) is doing double time “on the road.” The Heckscher Museum loaned it to the Hall of New York, and the painting returned to us mid-October in preparation for our upcoming Moonstruck exhibition. Talk about being in demand!

From the museum’s original Heckscher Collection, The Rising Moon reflects Miller’s desire to record the picturesque beauty of Long Island’s natural scenery. Painted in the late 19th century, at a time when many of the Island’s rustic areas were being replaced with industrial buildings, this nocturnal painting captures the serenity, mystery and utter beauty of an environment untouched by industrialization. A painter in the Barbizon manner, Miller’s work is romantically inspired yet realistic, featuring tonal qualities, softness of form, and loose brushwork.

How peaceful it must feel to be with a companion in the lone boat, under an ever-moving night sky and rising moon, surrounded by the quiet and raw woods and waterways of Long Island.