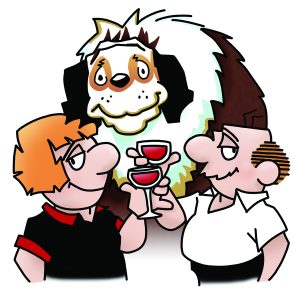 Bunny Hoest, the comic mind behind nearly 50 years of captions for “The Lockhorns,” admits it isn’t easy coming up with snappy one-liners, day after day, for the endlessly bicker­ing couple’s comic strip exploits, 30 of which are part of the exhibit The Lock­horns Meet Howard Huge through Nov. 5 at the Heckscher Museum of Art in Huntington.

“I work hard on getting the caption just so,” Hoest, 84, said in a telephone interview from her Lloyd Neck home and studio. “The Lockhorns is a one-panel cartoon, so you have to have everything very succinct and crisp.”

So far, that’s more than 25,000 (and counting) Leroy and Loretta gags she’s writ­ten since the battling subur­banites debuted in Newsday in 1968 as “The Lockhorns of Levittown.” The Heckscher exhibition features examples from 1976 to 1986, along with 31 framed Howard Huge comics, another of Hoest’s Jong-running creations, about a big – and big­hearted – family mutt.

“We wanted to have a representation of the major themes that are central to both comics and resonate with readers around the world,” says Heckscher curator Lisa Chalif. “Food, for instance, is a fun theme throughout, and in ‘The Lockhorns,’ speaks to Loretta’s amusing lack of cooking skills.”…