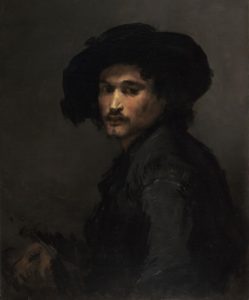 Not a portrait but a study posed by a professional model, this work has now been restored to what is presumed to be Vollon’s original title for it, Un Espagnol (A Spaniard), as cited in the sale catalogue of the dealer Prosper Léopold Éverard’s (1835-1881) inventory after his death. A half-length, preparatory sketch for the full-length painting entitled L’Espagnol (The Spaniard) in the Musée d’Orsay, Paris, exhibited in the Salon of 1878, it depicts a young Spanish male, theatrically dressed in seventeenth-century costume, topped by a cavalier-styled, plumed hat. The pose bears a striking resemblance to a portrait of Vollon (present location unknown) by his good friend Joseph Paul Marius Soumy (1831-1863) with whom Vollon briefly found lodging when he first arrived in Paris in 1859. The way the model’s face emerges out of the shadow into the light is certainly reminiscent of a similar treatment in the portrait. In The Heckscher Museum’s painting the outline of a nondescript object, held at the same angle as the pipe in the portrait was developed into the shape of a cigarette in the Salon painting. Both artists were alumni of the École des Beaux-Arts in Lyons. Tragically, Soumy committed suicide in 1863. The funereal black of the costume, although borrowed from Spanish old masters, may also pay retrospective tribute to Vollon’s long-deceased friend. Vollon kept Soumy’s portrait his entire life after which it was passed down to his son Alexis Vollon (1865-1945). 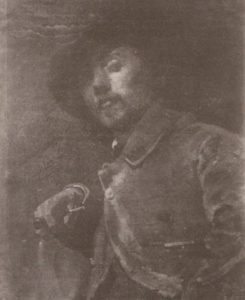 Although Vollon was known primarily as a painter of the lesser genre of still life, the Salon exhibition offered him the opportunity to prove himself capable of rivaling fully trained academicians by painting an impressive figure. L’Espagnol, with its tribute to the Spanish old masters and its predominant use of subtly calibrated blacks, eminently qualified him to pass this test. Spanish-derived tenebrism was a style well known to Vollon. Early in his career he had incorporated it into his own works through the influence of his friend and mentor Théodule Ribot (1823-1891). Moreover, in 1862 he had been commissioned by the French state to paint a copy (located in the Church of St. Jean-le-Blanc, Orléans) of Jusepe de Ribera’s Adoration of the Shepherds in the Louvre Museum. Created much later out of his own imagination, L’Espagnol further confirmed Vollon’s well-established status as a gifted master painter when it was unanimously hailed by the critics. 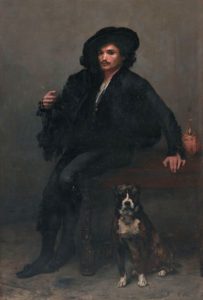 The model whom Vollon hired to pose for L’Espagnol also posed for the artist Charles Auguste Émile Durand, known as Carolus-Duran (1837-1917), in a bust-length composition entitled “Italian Model,” located in the George A. Lucas Collection in the Baltimore Museum of Art. In The Heckscher Museum’s painting, Vollon concentrates on the distinctiveness of the head, adorned by a broad-brimmed hat, cocked at an angle and draped by a feather. We are confronted by a proud, spirited, somewhat guarded individual. Heavy eyebrows, a mustache and the hint of a goatee describe the swarthiness of the complexion, accentuated by large, deep-set eyes. The warm flesh tones of the face glow within the confines of their dark surroundings. Two or three strokes of bright, creamy paint body forth the protruding bridge of the nose. Black pigments, marked by painterly flourishes of the brush, range from dense opacity to nearly translucent grey. The confident freedom of execution is reminiscent of Édouard Manet (1832-1883), a connoisseur of painting with black whom Vollon would have personally known through membership in the Société des Aquafortistes in the 1860s. Manet had set a precedent with his treatments of Spanish-derived themes throughout the 1860s. His Le Balcon (Musée d’Orsay), exhibited in the Salon of 1869 and inspired by Francisco Goya’s Majas on a Balcony (Metropolitan Museum of Art), would have left a lasting impression on Vollon, especially because his close friend Antoine Guillemet (1843-1918) had posed for one of its figures.

It seems somehow fitting that, before its donation to The Heckscher Museum, one of the painting’s former owners was the legendary and extremely wealthy James Buchanan Brady (1856-1917), known as “Diamond Jim” because of his love of precious jewels. The bravura of Vollon’s painterly style resonates with the bravado of Brady’s lavish lifestyle. His insatiable appetite for food, his stable of thoroughbred horses, his long-term relationship with the famous actress and singer Lillian Russell, and his somewhat shady business practices, all contributed to his notoriety. It is entirely possible that Brady spotted the reproduction of this painting in American Art News (reproduced at right) in 1909 and bought it directly from the Holland Galleries. The brief text that accompanies the illustration of the work, referring to it as “Portrait of a Man,” mentions the name of the prestigious New York dealership Cottier & Co. as part of its provenance. The Scottish artist and entrepreneur Daniel Cottier (1838-1891) began his career as a pioneer for the Aesthetic Movement, opening Cottier & Co. in London in 1869 and branches in New York and Australia in 1873. He specialized in the decorative arts, glass, furniture, ceramics, and interior design and began to collaborate with Louis Comfort Tiffany (1848-1933) on stained glass projects in the 1880s. Although Cottier himself died young, his New York business, which had become exclusively a fine-art dealership, continued until 1915.