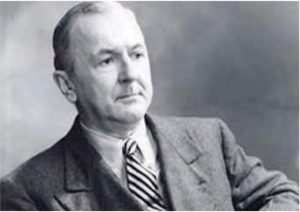 WHAT DOES THE PAINTING MEAN?

George Grosz (1893-1959) was a leader in the Dada art movement in  1920s Berlin. He left Germany shortly before Hitler came to power. Grosz  was invited to teach at the Art Students League of New York and moved with his wife to the United States in 1933.

Ecplise of the Sun is currently on loan to the Neue Galerie, New York City, which added richer context to the meaning of the painting: “In Eclipse of the Sun, Grosz vividly captures the rampant political and social corruption that characterized Germany in the mid-l920s. The central figure depicted is Paul von Hindenburg, president of Germany at the time and recognizable for his walrus moustache. He proudly wears his military uniform, bedecked with medals and with a laurel leaf crown perched atop his bald head. His physique is in sharp contrast to the group of slim and headless financiers in formal attire who join at the table. They bask in the glow of a darkened sun illuminated with a dollar sign-an acknowledgment of America’s investment in Germany post-World War I. A corpulent ‘man of industry,’ wearing a top hat and toting weapons and a miniature train under his arm, whispers discreetly in Hindenburg’s ear. A donkey wearing blinders decorated with the German eagle is balanced on a board tethered to a skeleton. The other participant in this motley group is a more somberly dressed but also headless man whose foot rests precariously on the prison bars below.

In the aftermath of World War I, many artists moved away from an Expressionist approach in favor of one marked by a more harsh and objective depiction of the world, which became known as the New Objectivity movement. Grosz, in particular, used his vision in a scathing critique of the regime. This made his life more difficult, and he ultimately chose emigration in order to ensure greater artistic freedom.”

THE LORE OF ECLIPSE OF THE SUN

Grosz brought Eclipse of the Sun (Sonnenfinstemis in German) to America, but after his death the painting was believed to be lost. In the late 194Os, the painting came into the possession of housepainter Thomas Constantine,  who had it  rolled up  in his Long Island garage for years. When finally rediscovered, it was shown at the Harbor Gallery in Cold Spring Harbor. Eva Gatling, the Museum’s first professional director, spearheaded a local fund-raising effort to purchase the painting for the Museum’s collection. More than 213 local residents, school children, and even then Governor Nelson A. Rockefeller contributed to the cause. The painting was purchased in 1968 for $15,000.

In 1947, Grosz moved to the cottage of the Hilaire Farm Estate in  Huntington, and lived there until he returned to Berlin in 1959. Grosz remodeled  the cottage into a two-story studio where he worked and taught. There are now 16 works of art by Grosz in the Permanent Collection. Grosz  died in Berlin in 1959, just months after his return to Germany.